Several unconnected events converged to make this photo (below). First, I received a review copy of The Nikon Creative Lighting System by Mike Hagen (from rockynook and NikoniansPress publishing). A review is on the way. Second, and more importantly, I received as a gift a bottle of Balvenie Doublewood 12 year old single malt scotch.

Read on to get details of the lighting setup and what I think works and could be improved in this photo. 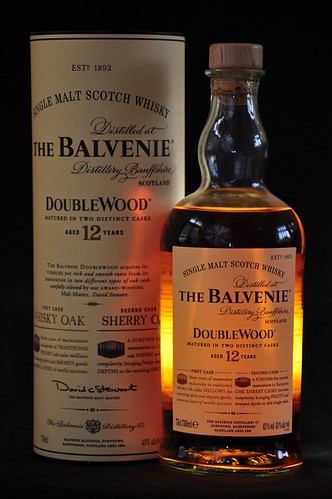 This scene was lit with two off-camera flashes. The first reflected from an umbrella directly to camera left set at -1.3 EV. The second directly behind the bottle, aimed at about a 45 degree up angle and towards the camera at 0 EV (TTL mode, normal sync). This flash was zoomed to 50mm. Both flashes were triggered wirelessly from the D90 built-in commander which did not contribute to the exposure. 98mm, 1/60s, f/5.6. Let’s talk about what I like in this photo and what I don’t like. First, the good. Overall, I got the effect I was going for. The scotch seems to radiate with a warm, inner light (which is just how it makes you feel). The tone is somewhat dark and moody as one would expect from a drink that’s so, you know, manly.

I intentionally used settings to blur the background container while still keeping all of the important text legible. I very much like the reflections of the whisky on the container. The background is dark and all of the attention is on the bottle. This photo (shot as a JPG fine) was cropped, resized, and sharpened slightly. No other image adjustments were made. It was the best of about 15 different takes. Flaws are more interesting thought, aren’t they? For starters, the bottle isn’t full (a). I was willing to sacrifice a perfect photo for a dram or two. I guess that makes me a bad photographer. But I have no regrets.

I zoomed the flash behind the bottle to 50mm to help minimize light spill (b). You can still see some light reflecting off the bottle, lower right. This would be virtually impossible to completely eliminate without using a snoot for the flash but is easily removed in post-processing.

There’s even more light spill lighting up the side of the container behind the bottle. Whether this is a flaw or not is a matter of taste. Again, it could be eliminated with a snoot on the rear flash. This area would be more difficult to deal with in post.

I have a feeling that the photo would be better off without the window reflections on the bottle (d). Or perhaps, with cleaner reflections. Closing the curtains or moving to a different room without windows would have helped. It would be very difficult and time-consuming to cleanly remove the reflections on the neck in post so this is definitely a decision you want to make while shooting.

A little extra light on the tube container in the background (c) would have helped balance the photo a little better and added interest without taking away from the bottle. Maybe just a little rim lighting on the left side. Or maybe a dim spotlight thrown across “The Balvenie”…

What do you think? Any tips to share? What would you change about this photo?