There has been a lot of discussion and a lot of fear among photographers regarding potential orphan works legislation.

It works by limiting damages that can be claimed if the work truly falls under orphan works protection. If a person wants to use a work they must ask permission from the copyright holder just as they do now. Under the current law, if they can’t find the owner they are out of luck. With the orphan works bill in effect, they could use the work after conducting a diligent search and failing to find the copyright owner. Later, if the original owner shows up, he must be paid fair royalties for the use of the work. It does not limit or change Fair Use.

Those of you who write blogs using WordPress now have a new tool to help you find quality photos to illustrate your words: the Photo Dropper. The Photo Dropper allows you to find Creative Commons-licensed photos on flickr and add them to your blog. You find images by doing keyword searches, and after you have selected the shots, the Photo Dropper even adds proper attribution links. It’s easy, it’s free, and you never have to leave the WordPress dashboard while you are working.

If you put your photos where they can be viewed publicly, inevitably someone will do something with them that you probably don’t approve of. The internet makes this easier than ever. You could hunt down and sue every infringer but frankly I think it’s probably better to pick your battles. Case in point: I was alerted this morning to the use of one of my photographs in a contest at a site called, ironically, PhotoshopTalent.com. Here’s the contest entry: And here is my original photograph: 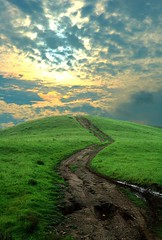 I’d critique the artistic direction the contester took my photo in but I think it speaks volumes for itself. The sad individual who used my photo for this contest will gain nothing from it but a bad reputation. Honestly, rather than be upset, I’m actually embarrassed for PhotoshopTalent.com and the person who created this contest entry. (And a little perplexed that PhotoshopTalent.com would open themselves up to such a potentially large liability.)

One of the most interesting comments on the contest entry was from the artist himself responding to criticism from another member of the site about the source of the background photo.