This time of year, many photographers are trying to take pictures of their pets wearing fake antlers, Santa hats, or other seasonal trappings. Although I don’t indulge in that sport, I do love taking pictures of my pets and other animals, and I thought I’d share some tips that have worked for me and for others.

1. Be patient. Pets don’t often pose. Sometimes they sniff your camera or your sleeve. At other times they decide to crawl under a table or fly on top of a dresser. Just wait quietly until they settle down.

2. Try to capture a characteristic action or activity. If you’re shooting your pet, you know its personality. Try to take a picture that reflects some characteristic, such as curiosity, goofiness, adoration, or self-possession. You do not have to include every inch of your pet, only the parts needed to express what you’re trying to capture. This image by Michael Fletcher certainly shows how alert this little dog is!

3. Get on the same level.
Standing above an animal and shooting down will seldom produce a captivating image unless your pet looks up at that moment with a winsome expression. Usually you will be more successful if you get close on the floor or ground. If you have a very small pet, such as a hamster, you might try placing it on a table. 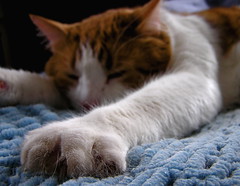 4. Fill the frame with your pet. If the picture is supposed to show your pet, that’s what you should show. Here’s where a telephoto can help. Use it to zoom in or else slowly inch closer to your pet so that it fills the frame.

5. Don’t ignore the background. One problem with being on a floor is that you may be surrounded by table legs, sofa skirts, and lamp bases. Eliminate such distracting background items either by composing to avoid them or by shifting your position so that the background becomes less busy. If your outdoors, for example, and you notice a tricycle, basketball, and trashcan behind your pet, move. Use a distant shrub or plain grass instead.

6. Try for natural light. Avoid flash if at all possible. It often upsets an animal. Instead, aim for natural light, perhaps near a window or sliding glass door. If your camera allows you to boost the ISO speed, do so. At ISO 500 the grain will not be very noticeable.

7. Use a fast shutter speed. Animals wiggle, twitch, lick themselves, or just look around. Unless you are trying to indicate speed, set your shutter speed around 250. Use the sports or action mode on manual cameras. 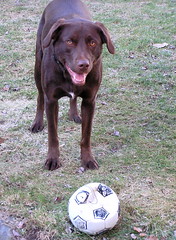 8. Aim for the eyes. Just as most human portraits focus on the subject’s eyes, so do most animal portraits. Eyes are expressive, so they should be sharp unless you are deliberately trying to emphasize another body part.

9. Overexpose a bit. Fur absorbs light, so a “normal” exposure may look dark. If an animal has both white and dark fur, bracket your shots. However, if a white-faced animal is sitting by a sunny window, you may need to underexpose a bit so that the facial fur doesn’t get blown out.

10. Include people in some shots. Don’t be afraid to show a family member holding a pet or interacting in some way. If your son talks to the parakeet, try to capture the moment. If your daughter reads while the cat sleeps in her lap, show them both.