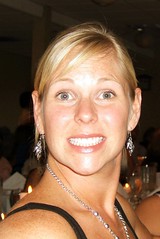 Many people shy away from flash photography because it makes people look bad. Photographs taken with a flash can leave harsh shadows that highlight every wrinkle, turn skin blue, shine a flood light at thinning hair, create hot spots on the forehead, nose and cheeks, and generally make subjects look unattractive. But when there isn’t enough light, sometimes your only choice is to use a flash or not take photos at all.

Well, I’m here to tell you that your flash photos indoors can look amazing. And here’s how…

All of the problems mentioned above with indoor flash photography stem from harsh, direct lighting coming from a small source: an on-camera flash. It’s no different than shining a flashlight in someone’s face except for the duration. But there’s a simple fix: turn the flash head away from your subject and towards a nearby wall. Bounce flash diffuses flash power over a much larger area which makes the light softer. Instead of coming from a 1-inch wide spot, the light now effectively shines from an area several feet across.

The traditional way to do this is to point your flash head at the ceiling. This can work nicely and ceilings are white more often than not which doesn’t affect the color of the light. But it’s also easy to create new, unflattering shadows under the chin and eyes. And it may not be possible if the ceilings are too high.

The alternative? Point the flash at the wall behind you. The principle is the same but has a few advantages over bouncing the flash off the ceiling.

The technique is simple: Here are two photos, one with direct flash and one bounced. Notice the problems in the first photo taken with direct flash: the harsh shadow under the chin, the shadow on the wall, the dark background, and the bluish skin tone. But the second photo, taken by bouncing the on-camera flash off the white wall behind me, has good color, softer shadows, and even illumination that doesn’t distract from the subject. One of the reasons I love my DSLR is because it allows me to attach accessory items like flashes. Popular flashes from Canon and Nikon (like the 580EX and the SB-800) attach to the hot shoe on top of the camera and allow the head to rotate 180 degrees. In addition to providing more power and lighting flexibility, a flash like this is far enough away from the lens axis to prevent red-eye. If you own a DSLR, you owe it to your photos to get a decent unit to replace the built-in flash.