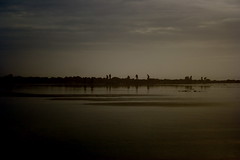 Time for lesson number two in our DSLR 101 series! Our topic today? You may have heard of it, it’s a little thing called ISO.

Why?
Although lower ISOs are usually desirable (leave your camera on Auto settings and it’ll choose 100 or 200 most of the time) to give you clear, sharp photos there are times when a higher ISO can be useful.

Choosing a higher ISO allows you to use a higher shutter speed or smaller aperture. This is especially useful for shooting in low light, particularly shooting action in low light (for example indoor sports events or concerts).

In keeping with the theme of learning, here’s an interesting program I hope expands in the future. Bigshot is currently only running workshops in the New York City area but it looks like they might reach other cities soon. The Bigshot workshops allow kids to build their own camera from a set of Bigshot click-together camera parts. The idea is to teach engineering and science concepts while building a working camera, which can then be used to teach photography.

The program is run by Columbia University and, although you can’t buy the Bigshot camera parts, you can visit their website to learn how the different parts of a point and shoot camera work.