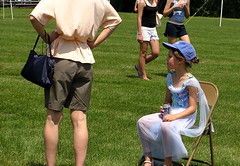 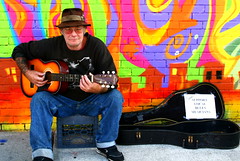 I wanted to learn how to take direct photos of strangers. Such photos often capture something totally different than images of people who are unaware. So I started asking other photographers what they did, and I started reading what others suggested. What startled me was that practically all of them said the same thing: create a relationship.

Start by just talking to someone. Be genuine and mention something about what attracted you to the situation or person. One older couple, for instance, attracted my notice because they were holding hands. When I said how nice it was to see two adult people hold hands in public, the man leaned over and said, “We’ve had lots of practice.” This opened the way for a brief chat.

Create some sort of friendly dialogue with your subjects and make sure your camera is visible. If you have a small camera, hold it in your hand. A larger camera should be around your neck or otherwise in plain sight. Often, the people will ask about the camera and you can then explain that you’re a hobbyist or freelancer and show them a few of your pictures. Then ask to take a shot of them. 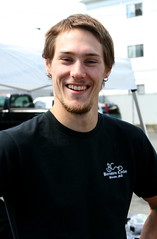 I tried this a few weeks ago, when I attended a street fair. The results were heartening. Every single person I spoke to said “Sure, go ahead!” after I asked for a picture. Although some shots were better than others, I liked them all, because they captured a momentary relationship as well as a face. Every image was direct, human, and appealing.

Later, I worried that perhaps the street fair was the magic element rather than the brief conversation. So I tried again, in a whole different situation, and was rewarded with the same response. I am convinced that this method works, at least most of the time. So I encourage all you closet street photographers to try this technique yourself. Even if you do not get great shots, you will certainly have some fun.