The other day, I put my hair up in a messy bun, threw on a blue sweater and jeans with tan Uggs and went into the kitchen, where Zoe, my 16 year old and Tenley, my 11 year old were standing, both sporting messy buns and wearing the exact same thing as me. I offered to change, and they protested, they  actually wanted all of us to look alike, which I thought was adorable. It started me thinking about the complex nature of moms and daughters, and fathers and their sons. I wondered whether everyone was like our family, who loves being together and doing the same kinds of things, or if most kids want nothing to do with their parents. What I found might surprise you. Kendal wanted a kind of traditional shot with her four girls.  What I really like about it is how each girl showed their own personality. Ainsley, the youngest, upper left, looks all full of fun, while the twins, upper right and lower left, are just as different as can be, and Shelby, lower right, well, you can just tell that she and her mom are super close. Interesting. I said the same thing to everyone at the same time, but their expressions are just as different as can be. I love this shot.  I told all four Men to look tough. When they’re little like that, there aren’t social conventions that they have to overcome  like when they’re bigger. They just all made muscles and looked tough,  and the dad went along with it, which totally makes the shot.  I think that any time you’re doing a personality shot, (and when would you NOT want personality??!!) you have to have your clients trust you.  You have to be willing to share your own personality in order for them to feel comfortable enough to  do the same. I must admit, I get crazy during our shoots. Everyone has a lot of fun, including me.

Expect the Unexpected…and shoot it! When I asked my Senior Spokesmodel Marissa’s mom to hug her and give her a kiss, something unexpected happened… Marissa said “ewwww” and pulled away. Her mom just started laughing and held on tighter, and when she saw the picture, she said, “That’s so US!!” 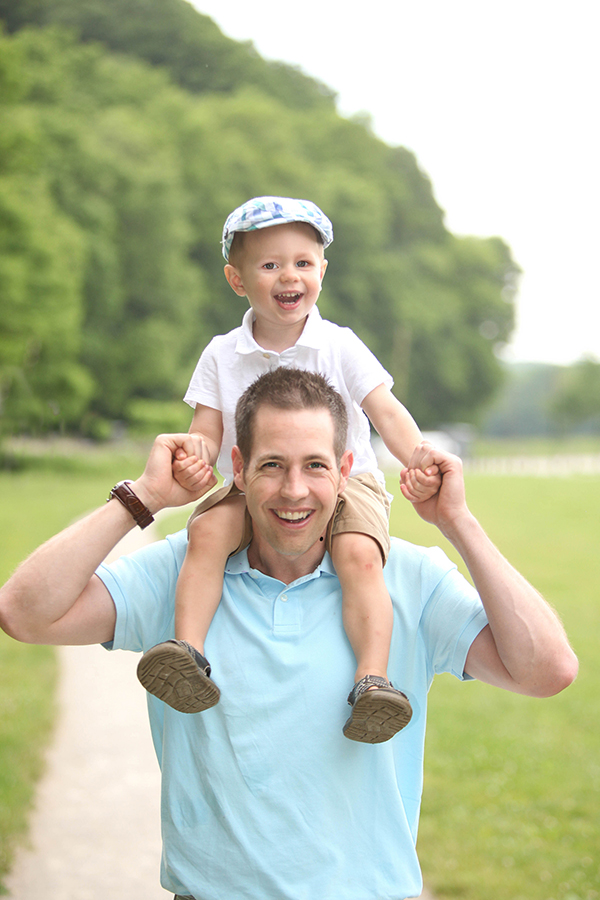 Babies love their Daddies. Their voices  are deep, their manner is rougher and gruffer than all of the many females in baby’s lives. So just having a daddy in the room is a great thing. You can’t explain anything to them, rationalize with, or bribe them,  they’re just cute,  so have fun with it, but if one looks just like his daddy, try to get matching expressions. That’s priceless, and Daddy is sure to want one for his desk.

Send me pictures of your family wins and fails to [email protected] and I’ll talk to you personally about them. Let’s get better together!!