Black backgrounds add drama to many pictures. When you have a single subject, blackgrounds make it pop. They are particularly useful when you want to focus attention on one object, person, or animal. 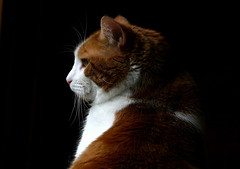 One way to create a blackground is to find and use some sort of black background, such a poster board or black velvet. However, that’s often cumbersome, particularly if you’re shooting outside. There’s another way that’s far easier. Look for high-contrast situations and then deliberately underexpose the background.

For example, look for a single window that casts light into an otherwise dark room. Place the object that you want to shoot in that beam of light. Look for early morning sunshine that strikes certain objects and leaves the rest in shadow. Then focus on the item that’s bathed in light. 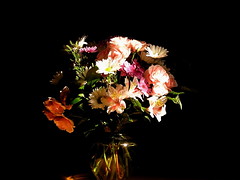 The floral bouquet was shot at my office. The building contains a dark hallway with a single window. The afternoon sun pours into that window for about an hour. I moved my bouquet into that light and started shooting. The dark hallway lay behind the bouquet, but I focused on the bright side of the bouquet. I composed the picture to eliminate the ugly stool beneath the vase.

Adjust the exposure for the parts of the scene that are bright. If you have a point-and-shoot camera, step in close enough so that the lit area fills most of the viewfinder. If you’re using manual settings, shut down the aperture. Then compose and shoot. 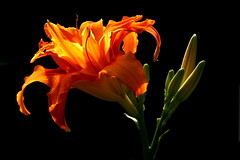 If you’re shooting outdoors, early morning is probably the best time. This daylily was shot around 7 AM, when the sun was low. Light hit the flower but not the dark mailbox behind it. I focused on the brightest section of the flower and took several shots.

When you process your picture, heighten the contrast slightly. You may also try reducing the brightness. This will make the background appear black or almost black. This simple process can help you create some outstanding images.